Margaret Atwood – The Testaments – The Winner
Info: More than fifteen years after the events of The Handmaid’s Tale, the theocratic regime of the Republic of Gilead maintains its grip on power, but there are signs it is beginning to rot from within. At this crucial moment, the lives of three radically different women converge, with potentially explosive results.

Two have grown up as part of the first generation to come of age in the new order. The testimonies of these two young women are joined by a third voice: a woman who wields power through the ruthless accumulation and deployment of secrets.

As Atwood unfolds The Testaments, she opens up the innermost workings of Gilead as each woman is forced to come to terms with who she is, and how far she will go for what she believes.

‘Dear Readers: Everything you’ve ever asked me about Gilead and its inner workings is the inspiration for this book. Well, almost everything! The other inspiration is the world we’ve been living in.’

Bernardine Evaristo – Girl, Woman, Other – The Winner
Info: Girl, Woman, Other follows the lives and struggles of 12 very different characters. Mostly women, black and British, they tell the stories of their families, friends and lovers, across the country and through the years. Joyfully polyphonic and vibrantly contemporary, this is a gloriously new kind of history, a novel of our times: celebratory, ever-dynamic and utterly irresistible.

Lucy Ellmann – Ducks Newburyport
Info: Latticing one cherry pie after another, an Ohio housewife tries to bridge the gaps between reality and the torrent of meaningless info that is the United States of America. She worries about her children, her dead parents, African elephants, the bedroom rituals of “happy couples”, Weapons of Mass Destruction, and how to hatch an abandoned wood pigeon egg. Is there some trick to surviving survivalists? School shootings? Medical debts? Franks ’n’ beans? A scorching indictment of America’s barbarity, past and present, and a lament for the way we are sleepwalking into environmental disaster, Ducks, Newburyport is a heresy, a wonder—and a revolution in the novel.

Chigozie Obioma – An Orchestra of Minorities
Info: Umuahia, Nigeria. Chinonso, a young poultry farmer, sees a woman attempting to jump to her death from a highway bridge. Horrified by her recklessness, Chinonso joins her on the roadside and hurls two of his most prized chickens into the water below to demonstrate the severity of the fall. The woman, Ndali, is moved by his sacrifice.

Bonded by this strange night on the bridge, Chinonso and Ndali fall in love. But Ndali is from a wealthy family, and when they officially object to the union because he is uneducated, Chinonso sells most of his possessions to attend a small college in Cyprus. Once in Cyprus, he discovers that all is not what it seems. Furious at a world that continues to relegate him to the sidelines, Chinonso gets further and further away from his dream, from Ndali and the place he called home. Partly based on a true story, An Orchestra of Minorities is also a contemporary twist on Homer’s Odyssey. In the mythic style of the Igbo literary tradition, Chigozie Obioma weaves a heart-wrenching epic about the tension between destiny and determination.

Salman Rushdie – Quichotte
Info: Inspired by the classic Don Quixote by Miguel de Cervantes, Quichotte is the story of an aging travelling salesman who falls in love with a TV star and sets off to drive across America on a quest to prove himself worthy of her hand. Quichotte’s tragicomic tale is one of a deranged time, and deals, along the way, with father-son relationships, sibling quarrels, racism, the opioid crisis, cyber-spies, and the end of the world.

Elif Shafak – 10 Minutes 38 Seconds in this Strange World
Info: For Leila, each minute after her death brings a sensuous memory: the taste of spiced goat stew, sacrificed by her father to celebrate the long-awaited birth of a son; the sight of bubbling vats of lemon and sugar which the women use to wax their legs while the men attend mosque; the scent of cardamom coffee that Leila shares with a handsome student in the brothel where she works. Each memory, too, recalls the friends she made at each key moment in her life – friends who are now desperately trying to find her… 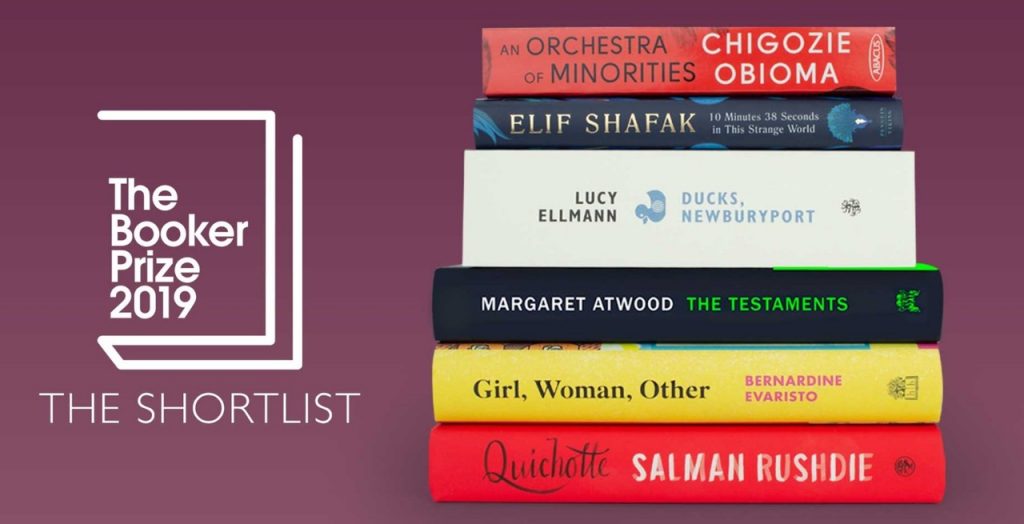